Sonu Nigam (born 30 July 1973)[2] is an Indian singer, music director and actor.[3] He sings predominantly in Hindi and Kannada language films but has also sung in Bengali, Gujarati, Odia, Tamil, Telugu, Marathi, Nepali, Malayalam, Tulu and other Indian languages.[4] Nigam has also released a number of albums and acted in some Hindi films.[5] He is known as the “Modern Rafi” after his idol Mohammad Rafi,[6] Sonu has won multiple awards including a nomination for academy awards[7]

Sonu Nigam was born on 30 July 1973 to Agam Kumar Nigam and Shobha Nigam in the city of Faridabad, Haryana.[8] His father was from Agra and his mother was from Garhwal.[9] His sister Teesha Nigam is also a professional singer.[10]

Nigam began singing at the age of four, when he joined his father Agam Kumar Nigam on stage to sing Mohammed Rafi's song "Kya Hua Tera Wada".[11][12] Nigam began accompanying his father on his singing appearances at weddings and parties. He moved to Mumbai with his father to begin his Bollywood singing career at the age of 26.[13] He was trained by Hindustani classical singer Ustad Ghulam Mustafa Khan.[14]

Nigam had changed his name to Sonu Niigaam citing numerology beliefs, but later decided to go back to his birth name.[17]

Nigam has launched[when?] his own music label on 30 July 2020 named 'I Believe Music' and "Rudhrashtakam" is the first track to release under the label.[18][19]

He has recorded Romantic, Rock, Sad, Devotional, Ghazal and Patriotic songs. He has sung in: Hindi, Bengali, English, Gujarati, Kannada, Maithili, Malayalam, Manipuri, Marathi, Nepali, Tamil and Telugu till date.[4][13] Nigam has released pop albums in Hindi, Kannada, Odia, Chhattisgarhi and Punjabi, as well as Hindu and Islamic devotional albums. He has released several Buddhist albums. Nigam has performed in countries in North America, Europe, the Middle East, Africa, Asia and Australia. In May–June 2007, he participated in The Incredibles tour with Asha Bhosle, Kunal Ganjawala, and Kailash Kher. In September–October of the same year, he gave solo concerts titled Simply Sonu in Canada and Germany, the first Indian singer to do so.[20] In April 2008, he toured India promoting his Punjabi single "Punjabi Please".[21]

Nigam provided playback singing for Hindi movies, including the title song for the film Kal Ho Naa Ho in 2003 to "Abhi Mujh Mein Kahin" for Agneepath in 2012 However, from the past few years, he has become selective about his songs so that he can focus more on creative works. His upcoming project with Bickram Ghosh named "Bollywood Retro" is one such project.

Nigam has released albums of Mohammed Rafi's songs including Rafi Ki Yaadein, a collection early in his career, which was re-released in Rafi's memory in September 2007 as a six-disc collection of 100 songs, titled Kal Aaj Aur Kal.[22] In 2008, soon after releasing Classically Mild, he released a single Punjabi track entitled "Punjabi Please"[23] and Rafi Resurrected, a two-disc collection of Rafi songs with music by the Birmingham Symphony Orchestra. He contributed to the lyrics of several songs and directed the music for his album Chanda Ki Doli.

After the death of Michael Jackson, Nigam released a song as a tribute to Jackson which was included on the tribute album The Beat of Our Hearts.[24]

In July 2008, he participated in a three-city tour of the United Kingdom, singing Rafi songs with the City of Birmingham Symphony Orchestra (CBSO). This followed the release of these songs by the CBSO and the Indian music company Sa Re Ga Ma on Rafi Resurrected.[26]

He participated in a US tour with Sunidhi Chauhan in 2009 called The Explosion 2009 tour and in a UK tour titled All Izz Well in November 2010. In 2011, Nigam collaborated with Kakas Entertainment and Laxmikant–Pyarelal for a Maestros Concert performing Mohammed Rafi songs.[27]

In 2011, Nigam collaborated with Britney Spears on a remix of her "I Wanna Go" track,[28][29] and with DJ Avicii on his song "Indian Levels", produced by Avicii in 2012.[30] He composed the title track of the film Singh Saab The Great in 2013 and has also composed music for other films including: Sooper Se Ooper and Jal, in collaboration with percussionist Bickram Ghosh in the same year.[citation needed]

He was ranked the Number 1 artist on the US Billboard Uncharted charts twice in September and October 2013.[31][32]

In September 2015, Nigam recorded a song with the music director Khayyam for the upcoming project titled Gulam Bandhu.[33] 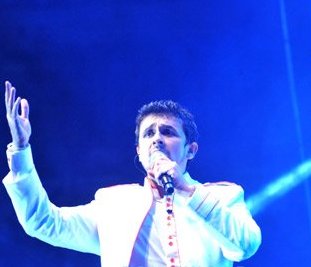 Nigam performing at the live concert in 2014

The songs "Mungaru Maleye" and "Anisuthide" were composed by Mano Murthy and written by Yogaraj Bhat and Jayant Kaikini respectively. Nigam has said that he finds Kannada songs more fulfilling than the Hindi numbers.[42] In an interview with Deccan Herald he said "Kannada songs make me feel positive".[43] He went on to say: "I highly respect the musicians of Karnataka and many of my favourite songs are in Kannada. I consider Bangalore as my second birthplace. Even if someone requests me to sing a Kannada song while I'm performing in the West Indies, I will sing it for them".[34]

From the same Mungaru Male combination, composer Murthy, lyricist Kaikini and Nigam got together to record the Kannada album Neene Bari Neene, produced by Ashok Kheny. Videos for the songs "Neene Bari Neene" and "Baa Nodu Gelathi" were shot on the outskirts of Bangalore featuring Nigam and model Madhuri Bhattacharya in the lead.[44][45] Nigam also composed a theme song for the Karnataka Bulldozers team in the Celebrity Cricket League and sang it with Kunal Ganjawala and Sowmya Raoh, who also penned the lyrics.[46]

As a host and judge[edit]

Nigam was the host of the Sa Re Ga Ma music show from 1995 until 1999 and became household name.[47] He returned on Sa Re Ga Ma Pa L'il Champs International as a judge with Suresh Wadkar in October 2007. Nigam was a celebrity judge on the Sa Re Ga Ma Pa Mega Challenge grand finale on 12 December 2009 .

On 23 August 2015, he appeared on "The Anupam Kher Show" sharing his life experiences. He has been also one of the three judges of Indian Idol 2016–17.

Sonu is one the most popular playback singer in Bollywood,[49][50][51] and is widely considered to have inspired new singers in the Bollywood industry. He is often compared to Mohammad Rafi for similar voice texture.[52][53][54][55] Among the old generation of singers, Lata Mangeshkar considers him a good singer.[56]

Singer Armaan Malik takes a lot of inspiration from him.[57] Singer and musician Ankit Tiwari cites Sonu Nigam as one of his musical inspirations.[58]

His series of tweets branding 'Azaan' (Muslim call for prayer), temple, gurudwara, and other religious places using loudspeakers to disturb the people who don't follow the religion as "forced religiousness" landed him in a controversy as a member of a religious group (in particular against Azaan) took offence at the matter and the manner in which he voiced his concern.[70] In his later tweet he stated that he stand by his statement.[71] He later clarified that he is not against any specific religious ritual, but against the use of loudspeakers on religious buildings. He clarified that the use of loudspeaker to create noise pollution should be stopped beyond certain time as per the law of the land, irrespective of whether it is from a temple, mosque, gurudwara, or any other places.[72] Later, Nigam again sparked controversy, when he posted a video of Azaan from his home which proved that he was indeed disturbed very early in the morning.[73] Syed Sha Atef Ali Al Quaderi, vice-president of West Bengal United Minority Council announced a reward of ₹10 Lakh to anyone who shaved Nigam's head, to which Sonu Nigam responded by shaving his own head to claim the reward.[74]

In June 2020, after the demise of actor Sushant Singh Rajput, Sonu Nigam posted a video saying that the music industry is also monopolized by two major companies and that he had also faced similar discrimination. He urged these music companies to be fair and kind to the newcomers in the music industry. Although he stopped short of naming anyone he made it clear that the malpractices in Bollywood are terrible and are almost killing the music talent of the country.[76] Nigam uploaded another video to say that after his previous video, the Music Mafia has gotten together about six geniuses against him and sent a press release to the Times of India. Sonu Nigam maintained that he didn't name anyone and was only putting up his point of view regarding the malpractices in the music industry of Bollywood. In his second video Nigam names Bhushan Kumar, CEO of T-Series and tells him to stay away from him.[77]

Some or all contents in this article are imported from the English Wikipedia. The list of its authors can be seen here.
Retrieved from "https://wikipedia.ind.in/index.php?title=Sonu_Nigam&oldid=37185"
Categories:
Hidden categories: